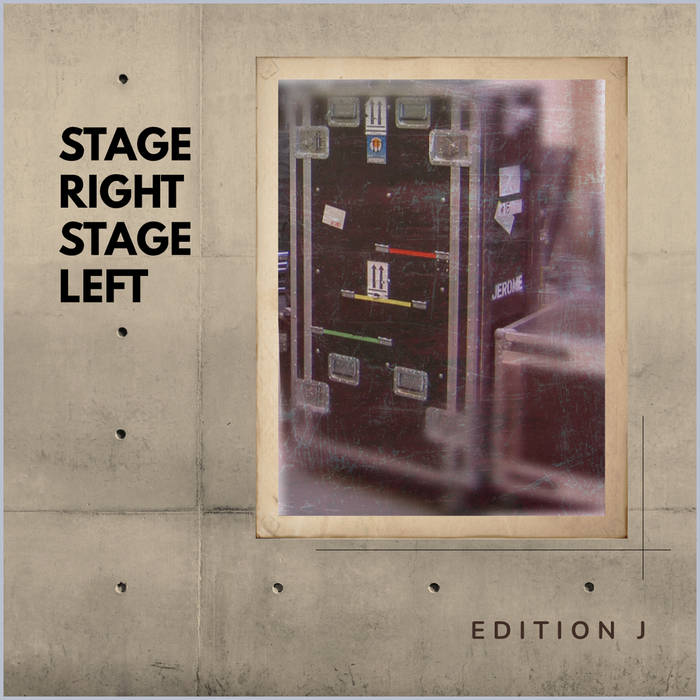 Timequest Media UK Fantastic release from Jerome. The 1990's tracks a poignant reminder for me having seen TD perform for the second time in 1990, albeit at The Colston Hall Bristol. Incredible too to have met Edgar and the band. With that in mind here's keeping crossed fingers (and everything else) for Melrose Edition J. Thanks Jerome. Favourite track: 3 Bikes In The Sky.

Peter Ravn Wow! A real nice blast from the past, Jerome! Thanks a lot!


TRACK INFOS AND SOME NOTES FROM JEROME:

On "Stage Right Stage Left" you will find a small retrospective of my stage activities in association with Tangerine Dream, as well as a few tracks from off stage. In this respect I have listened through many old recordings to find the best ones for a release. In the end you could have filled several CDs with this material, so "Stage Right Stage Left" should at least give you an impression of what has been lying around in my archives for so long. The few songs that have already been released were at least remastered (just like all the other material).

Before the shooting of the (later GRAMMY nominated) "Three Phase" video had started, Edgar and I did some jamming for the technicians to set the levels. So this somewhat unusual version was created. On the guitar, I'm probably a little freaked out. Normally the lead guitar is played by Zlatko Perica here.

A track which we originally intended to use as the guitar part for the UK tour in 1990, but then didn't choose. This recording is just a simple jam session of the two of us.

The studio version of this song, which so only appeared on an CD-5 EP in the USA. The rhythm guitars on this recording were recorded on six different tracks by Zlatko to create this wide and fat sound. Nowadays this effort could be done in a few minutes with software.

As the title says. A version without saxophone.

A soundboard recording of this song during Tangerine Dream's UK tour in 1990. Compared to the album versions, there are no lead guitars from Edgar and me on the live version.

The track "220 Volt" has only been released as a live version, so here is a studio version. Each tour was preceded by intensive rehearsals, which we recorded as memos to further elaborate the parts. This is one of them.

Another studio memo in preparation for the Tangerine Dream concert in London 1996.

This track is actually from the Tangerine Dream album Jeanne d'Arc from 2005, but we included it in our live program with Loom. This version is from a solo concert of mine where we played it at the end of the set with the Loom lineup.

Cover versions had been a tradition at Tangerine Dream since the early 90s. But this one is so extremely changed that it's not really a real one. Therefore also the adapted song title, since the original served here more as an inspiration.

The track "Homeless" has only been released as a live version, so here is a studio version. Each tour was preceded by intensive rehearsals, which we recorded as memos to further elaborate the parts. This is one of them.

A recording of my guitar part, which I played on the England tour in 1990. Unfortunately, the original source does not indicate where this track was recorded. I guess it was the soundboard recording of a soundcheck, because Edgar's guitar is missing on this recording.

One of our encores on the UK tour in 1990, this is one of the few songs where I find the use of saxophone worth listening to. Maybe because the basic composition itself didn't have such a cheesy approach as some later tracks.

We had this song as an encore option during the 1992 USA tour. However, we played it only once. This is the recording of it.

Performing at London's Hammersmith Odeon was a lifelong dream for me, as so many legendary acts have played there. However, I was actually only 19 years old when we actually gave two concerts there, on two evenings. This recording is the opening part of the show. On this tour we had a so-called "Kabuki" curtain which fell down from above only after a few minutes, revealing the stage. That's why there is an applause in the middle of the song.

The vocal version of this song was also only available on a CD-5 EP, which was only released in the USA. For this version I had raised the tempo a bit compared to the instrumental original. Since some may still not know this version, I have included it here.

This is the original version, without any additions. Who always wanted to play the later version with guitar ... here's the basic track for it. Enjoy practicing! ;-)

The same info that applies to title number 16.

I wasn't sure at first if I wanted to include these two bootleg recordings on the release. In the end I decided to do it, because the concert in Chicago was one of the most enjoyables on the whole tour at that time. I think that comes across quite well on the recording, so it's a nice memory for me. On top of that, I invested some time in remastering it. So this recording is now an official bootleg!

Again, the enthusiastic atmosphere of the crowd was captured well. That's why I also found this recording very listenable after some remastering. The idea for "Looney Tunes" came to me by chance during one of our sessions before the tour, when I put this as a gag into the breaks. For the USA tour we found it quite suitable, because there almost everyone knows these things and it was absolutely untypical for Tangerine Dream to do something like that on stage. At some shows, the crowd was already shouting along loudly when they heard the samples for the first time through our PA system.

All titles composed, recorded and arranged by Jerome Froese between the years 1990 – 2014 except

All tracks on this release are compiled, re-mastered or remixed from
the original tapes, computers or stereo master tapes in 2022 at the “Noontide”, Berlin.